We participating in a Wednesday Play Group called Play to Write over at Cherrios and Lattes. This is week 3- Write/Spell Your Name. 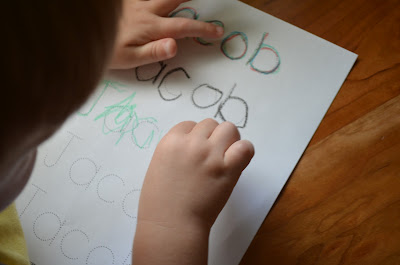 We started this week's practice with some name tracing. Cherrios and Lattes provides the printable for some dotted letters. She suggested doing rainbow writing with this sheet. I showed Jacob but he was more interested in writing all the Jacobs. I started by modeling on the first name. Then I held his hand and we did it together. Finally I let him do the last three on his own with only my verbal prompts. 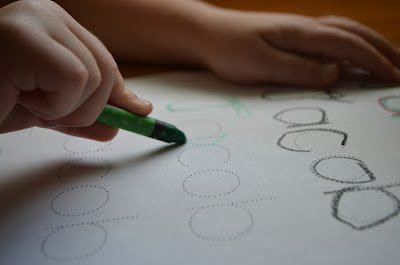 He took this very seriously and was very proud of himself! I was surprised at how much he liked doing this activity. He has a long way to go but he did pretty well! One thing I had to repeat was not to go around the o and a more than once. He wanted to go around and around. This is an activity that I think he will want to do again! 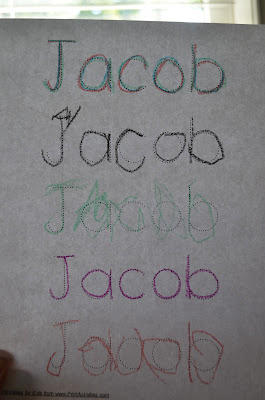 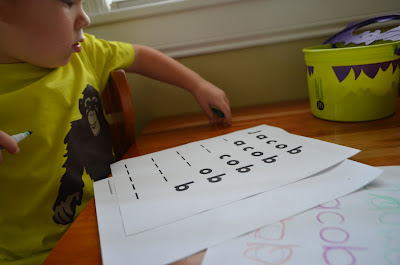 We sung the song as we completed the activity. He needed a lot of prompting but was able to complete the activity. I think he will do better next time. We will try the activity again and practice this weekly. He enjoys activities that involve his name. 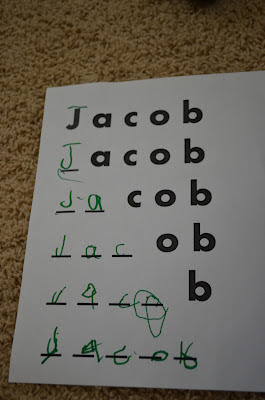 Looking better! I am proud! His Js are his favorite!

Popular posts from this blog

September 18, 2012
Jacob did a little name writing practice today. He was asked to trace the dotted lines to write letters for his name. This is good practice with spelling as well. I had him say each letter as he wrote the letter.  As you can see he is very choppy and not exactly on the dotted lines. His motor skills are not quite sharp enough yet to be able to hold the crayon and he especially loses control as he works on towards the end. We also did a Missing Letter Name Practice. Both of these ideas came from Cherrios and Lattes ' Play to Write, Write to Read. These are good ways to practice names and writing. He gets very angry if he thinks he made a mistake. See the scribbling. I have to reinforce that it is ok to make a mistake and that everyone makes mistakes but we just keep trying. Practice is the only way to get better. When this happens I cannot help but think of my former students that did the very same thing and proceeded to throw fits and give up. I hope to help Jacob ge
1 comment
Read more

October 11, 2012
As a fun and different way to practice the alphabet I had Jake paint the letters. He really just traced the letters with paint and a q-tip. I wrote all the letters and then had him trace over them. He is not ready to write  all the letters on his own so this is a good way to practice. He gets frustrated with his lack of motor skills when writing so I thought it would make a little practice exciting. Paint makes it much easier to trace and helps build confidence. He really enjoyed this and did not get frustrated at all. He tends to scribble over the letters when using a crayon to trace letters. This did not happen for most of the letters. He did great!
Post a Comment
Read more

The content on this blog belongs to the author. Links to this blog and it's posts are always welcome, but please do not copy images or text for use on other sites without permission. Thank you!